The Orca “EDGE” dive computer changed everything. Released in January 1983, Orca Industries Inc.’s EDGE was the first commercial dive computer that proved to be reliable. Weighing in at 1.6 pounds, this brick-sized milled-aluminum, EDGE displayed a diver’s theoretical tissue loading in real-time, and enabled users to do full decompression dives to 200 ft./60 m. EDGE is actually an acronym standing for “Electronic Dive Guide.”

I purchased this EDGE in 1988. It did change our diving profiles and Lord knows, I did take it over the edge a few times. Somehow, we always managed to re-surface in agreement, OK, there was that one time on a remote reef in New Caledonia where, if it could speak, my EDGE would have told me… “You’re, done for.” Hey, there were some feeding manta rays somersaulting between 70 to 110 feet deep that I was hell-bent on photographing. I paid for it by pulling some serious deco time wherein I had to sit alone on the edge of a steep drop-off in 15 feet of water at dusk while the zodiac ferried all the other divers back to the mother ship. The dive guides came back for me and I made it back onboard in time for dinner. My trusty EDGE, however, did not emerge from a never seen before “deep freeze mode” until the next morning. Hey, it was the early 90’s, we were young and revolution was in the air. All this to say, in its day, the Orca EDGE Dive Computer was a technical marvel. 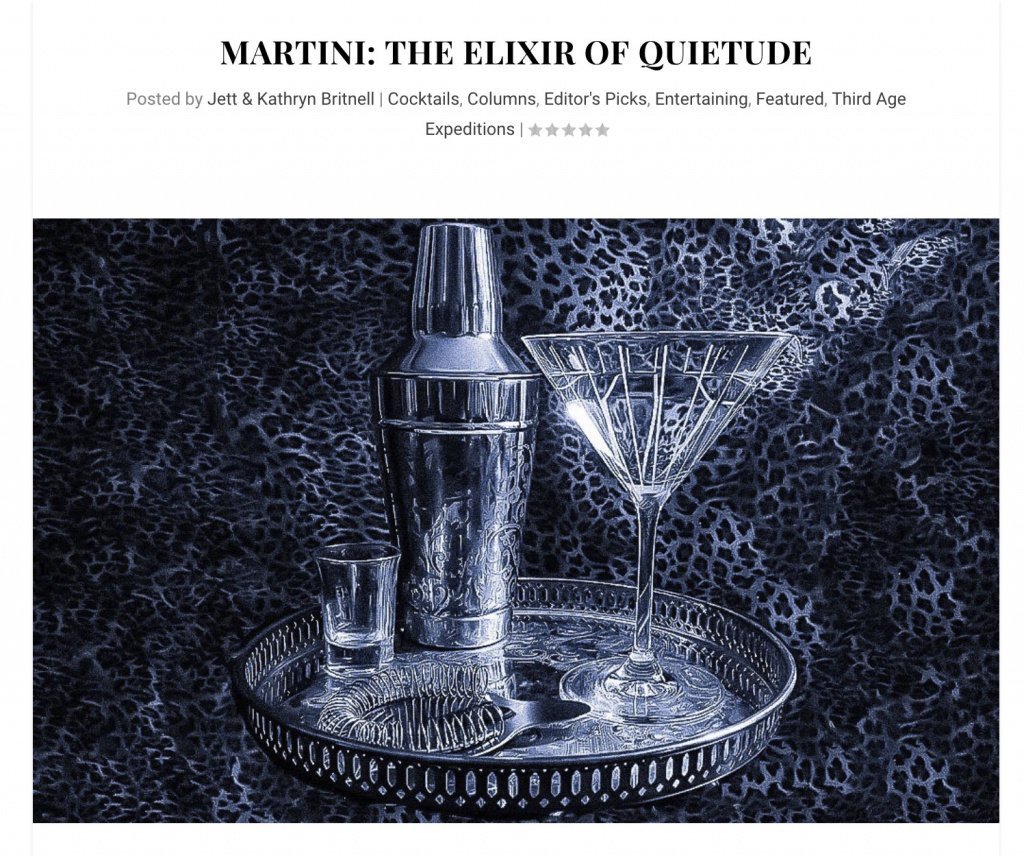 We have earned another “Editors Pick” and feature story!
“For the uninitiated, a Martini is a classic cocktail made by blending only two basic ingredients, A London Dry Gin and vermouth. Shake or stir these two spirits together, and garnish with either an olive or a lemon twist, then strain into a chilled Martini cocktail glass. The gin Martini is one of the most elegant and popular mixed alcoholic cocktails on the planet. While the dry gin Martini was popular from around 1910 to 1950, the vodka Martini rose in popularity from the 1950s onward and quickly gained ardent fans. Gin unquestionably remains the more classic traditional spirit as it presents a crisper botanical note. “Vegas Water,” a slang term for shots of vodka, is deemed to be smooth and silkier on the tongue. The debate rages on within the cocktail firmament as to which base spirit is superior in a Martini, but it truly all boils down to being a matter of personal taste.”
MARTINI: The Elixir of Quietude, is our magnum opus… chef-d’œuvre… passionate homage praising the Martini cocktail. A departure from our normal subject matter, but something that was already largely written in our soul from experience. This story is heavy on the word count as we included some martini recipes along with historical content. Drinks all around!